Things are different in Mexico

My friend Elizabeth told me told me of a method of well drilling she had done on her compound in Zirahuan , colonial Mexico, pronounced cita win, which is a fine example of of things that interest me in travel. She needed a well drilled to service homes she was building on her beautiful lake view property. When the man and two children arrived from the village and witched a good spot. She assumed work would begin and left to do errands, upon returning she went over to look and found that the well digger, was a digger. She assumed he was digging a hole to line the top five or so feet with bricks. The next day the children arrived with ropes and buckets ,and the father with the same shovel. Latter she was surprised to find the children lifting the dirt out as there father dug down. She asked her friend bob to get a ladder so the well digger could climb out that evening ,when he finished the days digging. Turned out, it was not needed ,he had cut foot holds in the side to climb out himself. He ended up going 40 feet with no luck, I believe oxygen runs short at about that point, pumping air down would be hard. They gave up on that spot, but she was not going to see that process again, and told the well digger to drill the next effort. He started the next day, with a hand turned drill with his children helping. And they eventually found water. Some years latter,she wrote me a note ,inviting me to visit with only her only promise being a hot shower and good cup of coffee if I came. How could I say no. I asked a friend how do I get to a place like Morellea Mexico. I had no idea where it was. I am glad I went. I have many fond memories of Mexico. Latter a friend of mine from Iran told me that wells were dug the same way in remote parts of his country, makes sense when you think about it but shocks one at first. 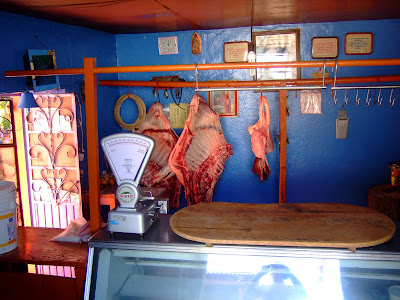 In Zirahuan a small village on a pristine lake 7200 ft sort of half way between Mexico city and Guadalajara, meat is cured and sold in a fashion similar to my friend bobs method I talked about in Theresa is marble in them there islands. Seems to work fine. 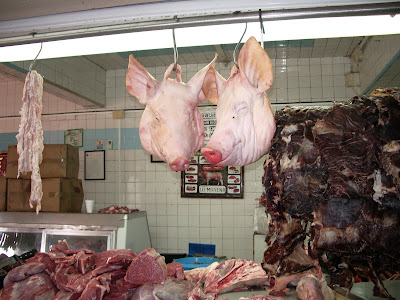 Same is sort of true in Urappen, a city of 300,000. Forty miles away.
But I draw the line on fish from the local fisherman’s wife, what I call suckers, that are laid out for sale all day uncleaned on a table , as they are presented on the road a couple of blocks down from the home I stayed at in Zirahuan. However I certainly admired the persistence and ingenuity of the fisherman who stayed out all frigid night at 7200 feet elevation, and netted these fish, in their dugout logs at this elevation. These log boats are fiberglassed tree trunks. I asked my daughter to bring my binnacles on a visit so I could watch these hard working men. The harbor masters attending to this protected lake offered me fish stew they cooked on the floor of their building in a crock pot. My daughter who knows about food, told me she thinks the fish offered on the table are used to make fish stock. We did have some fine fish served at a lakeside raft restaurant though a treat my grand baby declined.

I never thought that Mexico had and used so much timber in its historic construction. I think I had seen to many Roy Rogers, Gene Autrey, Tom Mix, and Cisco Kid movies in my youth. At this elevation hard wood and pine forests dominate the land scape. Traditionally homes were built by stacking heavy timbers in construction of fine sturdy warm homes. These old structures are sought after to build beautiful decks these days. I have read that stone buildings in Mexico City built on a lake were lined with aromatic woods.

My friend Carlos left this part of Mexico as a truck driver for 30 years. He returned as a successful stone business man to attend graduate school in Morellea and take care of his avocado orchard and family. He told me that he noticed a reduction in the amount of streams and available water in those 30 years. Too many trees had been replaced with crops and the planting of the wrong kind of trees. As a student of ecology I appreciated his observations. As he showed me his avocado orchard and gave me insights to this type of agriculture. There are more then 100000 acres of avocado orchards in this region.
Huge forests of avocado trees, mostly all beautifully fenced and guarded, they are valuable. I have been lucky in travel.
The village I lived in was surrounded by hardwood and long pine needle trees. These trees are woodlots set aside for locals to use to cook with. These forests are well cared for by the villagers, because they are needed by them daily, and in the future. I saw one chainsaw in 4 months, interestingly it was carried by a women whose husband road the mule she walked in front of... All the other wood cutters seemed to only use machetes to cut wood. One limb at a time. Most carry their firewood on their back carefully bundled like a large backpack, from my simple observations a human seems to able to carry about one-half what is carried on a mule. Some villagers have mules, a noisy animal, but most do not. I once saw a hand truck entirely made of wood including axle and wheels. Sadly I can't pull up pictures of it. It was a wonderful sight up in the wood lot. There were two grandpas with oxcarts . What a sight, grandpa leading two oxen, pulling a cart up to the wood lot, with grandbabies riding along as helpers. The best oxcart story happened on the road to Santa Clara the copper city. We were traveling through the forest on this road made of hand-laid tiles when we came across an oxcart with a man sitting on top of a 4-foot diameter log. She wouldn’t stop for me to photograph, later I realized she knew the log was illegally harvested. I wondered how he cut and loaded this huge log and what he was going to do with it.


I have a lot of Mexican logging stories, but I will let the picture I took some years later in Santa Clara, were the man is shaping a 60-foot rafter cut from the local forest in remodeling a old church. Later he was directing the heisting of the of the timbers up inside the church through an opening in the wooden barrel road.

Posted by Joseph Conrad at 3:04 PM

Email ThisBlogThis!Share to TwitterShare to FacebookShare to Pinterest
Labels: Mexico