There's Marble in Them There Islands, Part 3

There is a wealth of misinformation surrounding the marble industry. One example is illustrated here. Many people assume marble has value. Over the years I have had prospectors and land owners come to me with accounts describing the number of acres of marble they have. Always accompanied with the statement of inexhaustible supply. Or how often individuals ask me if I would store, or buy salvaged marble slabs from them. 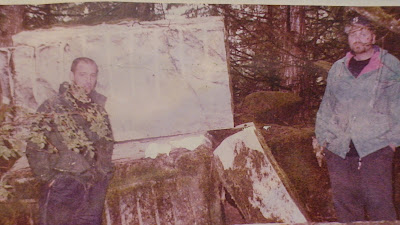 To many the idea of thousands of already-quarried marble blocks lying abandoned in the rain forest of SE Alaska seems preposterous. Yet these blocks have laid peacefully on Marble Island Alaska for over one hundred years. There must be some reason for this.


Through a romantic lens, marble mill blocks in your back yard would seem to harbor value, however, as a grizzled stone industry entrepreneur, I realize stone in itself has little value. It only acquires value when you invest your time and money in it. This is typically not understood by prospectors and site owners since from their perspective the stone on their land has value and they expect monetary rewards leaving the risk and investment to someone else. I have always found this to be the case. Marble fever like Gold fever. Easy to understand. In this case the marble blocks have to be transported to a location with infrastructure to saw the blocks into slabs. No such place exists in Alaska. Finished slabs may have value. Risky business, in the stone industry you are competing against the world in sawing technology costs. USA, India, China, Brazil, Italy, Spain, all tough customers to compete with locally.

The dreamer looks at this situation and thinks it must be possible to set up a diamond wire saw and saw one slab at a time, a technology he has seen in stone journals or television specials. (This single wire technology may work in some situations but will not work well in the competitive slab market.) This stone is so unique, has such historic value that surely people will pay what it costs to produce locally. After all we live in an age of local is better. Such naivete. (See my essay Local Knowledge). For the business reality is, white marble competes with other white marble for the white marble market. Few people are discriminating enough to see the difference between them when they are spending their money. Many a local architect or potential commercial or residential customer inquires about using a local material only to say upon receiving your proposal, what do you mean local material costs more then Carrara shipped all the way from Italy.

Everyone who travels to the Apuane Alps looks at the great marble mountains with wonder and romance, only the Italians can generate, as they do with so many products, but it's a rare tourist who stops by the stone factories below, churning out slabs of marble and granite from mill blocks shipped in from throughout the world to be gang sawed with great efficiency then shipped by container back to the world at ocean fright rates. ITS ALL ABOUT GANGSAWING EFFICENCY, ALWAYS HAS BEEN SINCE 1950.

Vermont Marble Company did just that around the turn of the century, setting up gang saws in Tacoma and San Francisco and supplied thousands of square feet of white marble for commercial building throughout the west until the bottom dropped out of construction around 1929. The Italians developed faster and cheaper sawing systems than was done in the USA. This along with international port to port freight rates gave Carrara a competitive edge.

It's a rare and special American who is willing to pay the cost of local material for his or her home or commercial project. Italian romance is hard to overcome since it is also the cheapest. It seems to me that the primary reason all these saw blocks languish in the rain forest is because of international competition for white marble provided by massive sawing economies of scale and international ocean fright rates.

So why doesn’t some wealthy investor see this opportunity and set up a modern gang saw operation in Seattle or San Francisco and barge these saw blocks there and provide local material at a slightly higher cost then Carrara? It would be to risky -- one color is not enough to sustain a sawmill. The volume of sales would never pay the costs. One only has to spend a little time on the internet to see what a silly idea it would be today. Marble brokers have the world at there fingertips with much less risk.

I think environmentalists (I studied physical geography, biology, and urban studies in college in the 1970s planing to be an environmental planner ) who speak of local products being more environmentally friendly do not take into consideration modern container shipping.

I always smile to myself when someone tells me they used concrete, poured on top their kitchen counters rather then foreign granite. There jaw usually drops when I ask them if they think blasting limestone from eastern Oregon, crushing it, then cooking it up to 2500 degrees releasing noxious gases, then trucking it to Portland, then dredging the Willamette river for sand, mixing it up and pouring it on to your ever expanding and contracting wooden counters then sealing it with some chemical so the man made limestone won't immediately react with your food, is more environmentally friendly then drilling and splitting a stone mill block from the ground sawing and grinding it with diamond blades (no chemicals only abrasion) then port to port container shipping is more environmentally friendly? REALLY. Some trendy ideas just fool the general public and they get stuck with a vastly inferior counter at the same cost as natural stone and you had a guy who knew how to use a trowel rather then a master craftsmen do your job, such a deal. 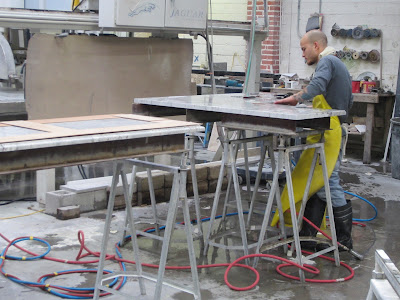 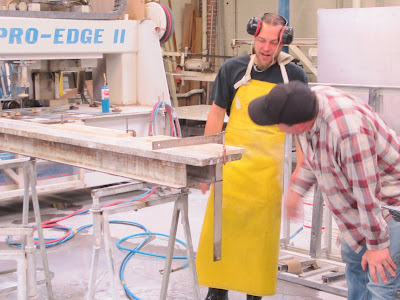 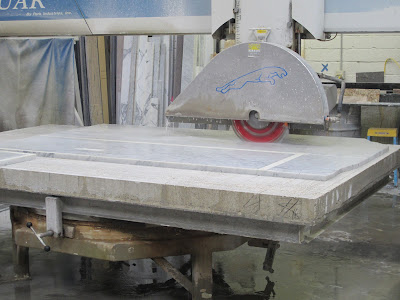 Local use of local stone, in this instance, as much as I would like to see it happen, will likely never occur. But we can take the raw product, stone slabs, from throughout the world and add value locally, a remarkably unique business in today’s US economic situation Just what this country needs.

WHAT THEN TO DO WITH THIS BEATUFUL ALASKAN MARBLE
Chapter 4.