Form As A Result of Historic Process

This paper says sometimes form is a result of historic process

I published an article in stone world magazine in 1996, where i introduced a concept I called "inside out design." Looking at it 15 years later, I still believe it is a good article even though I have no reason to believe any one ever read it. Never the less 25 years and one half dozen articles later I still attempt to provoke minds, for better or worse.

I have read that capitols on stone columns imitate tree limbs on original wood columns. To me this makes sense, particularly since I have seen small tree trunks used this way to support wooden boards for use as platforms to pour concrete roofs in colonial Mexico.

Historians would have you believe that if you don’t know the difference between Corinthian, Doric, or Ionic capitols, your education is incomplete. But to me I never cared, it seemed pointless, but I do like the tree branch concept, which probably casts a shadow on my education.

I believe, based on personal observation gleaned from 50 years in the stone business, that the technology within industry provides designers basic building blocks to work with. The possibilities and limitations of the medium you are working in change through time. These changes provide design professionals an ever-changing variety of possibilities. This all seems logical and apparent to most of us.

However, what is interesting are those limitations of past technologies, that become permanent design staples all around us. Learning to recognize these technological glitches to me provides a more meaningful appreciation of the design environment. It goes back to the tree limb thing, I think. For example, walking through an historic neighborhood with a craftsman who has knowledge of wood construction, or walking the streets of a city with a stone worker interested in history, is much more fun than taking a tour and having someone tell you the architectural style and the name of the architect who designed it. I think this suggests that I am not only interested in the designers name but maybe my interest is more centered on the technology and people working on the project.

I am sure that every construction medium could chime in here -- it would be interesting to hear other thoughts. My experience is with stone which has traditionally been the provider of urban forms or designer building blocks.


Here are a few examples to open the discussion:

The quirk miter. A staple of urban stone design


Solution: split and pitch or saw and grind strong edge - A staple of urban stone architecture. 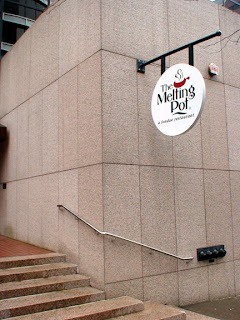 Rustification
The historic difficulty of holding sharp corners before modern equipment is probably the reason for rustification. That is a term I use to describe softening the edges of each stone with a bevel or round. This seems to have become a staple of the stone imitation industry, terracotta. By employing various bevels, rounds and offsets designers have been able to create beautiful designs in building forms in both stone and terracotta. My stonecutter father used to say ‘it all comes out in the wash’. The chips that is. (“wash” being a term stonecutters use for bevel.)


Nothing worse then looking at an old stone building with close-fitting joints without details of some sort separating the stones and seeing the front, or what stonecutters call the face of the stone weave in and out.

35 years ago a design firm asked me how to get a elegant look in their entry lobby without paying a high price. I advised them to bevel the edges of marble tiles to make them appear like blocks of stone. They did and it seemed to come out great. This technique seemed to be used quite often . The beautiful use of stone tiles in mall architecture still fascinates me, even though I don’t frequent malls much. Stone use in mall design makes a strong statement, good or bad.

Because gang sawing stone slabs has always been a difficult and imprecise job, granite veneer slabs have often employed a structure called the head in architectural projects, that is corners, are dealt with by specifying a given fixed dimension at butt joints.


Even today my son often uses a CNC stone router to plane all exposed edges on kitchen counter projects to provide a uniform edge. It is one of many things that separate an average job from an outstanding counter job. Old tricks in modern stone fabrication.

I have a suspicion that many moldings that have become design staples were originally from wood or stone problems that are now part of our daily lives. Can you think of any?
Posted by Joseph Conrad at 10:24 PM