Living and walking about a city is always an exciting experience for me as a stone history buff. Something new around every corner. It's like a road cut for a geologist or a walk in the forest for an ecologist. Up to now Chicago is my favorite city, although my son says new york is better.


I have a simple 4-step program that may help you enjoy your urban walks as well. It’s an urban ecology starter that works for me.


I believe there have been four major changes in the stone industry since 1850 which have helped define the urban landscape. I call them footprints in stone. Recognizing these technologies helps me put these building forms into a time frame. Maybe not perfect because there is overlap and digression, just as there is in fashion, but it’s a useful historical reference system, and a sense of history never hurts. Hopefully it will help to make one more comfortable in our urban environment.


In this era, stone was locally quarried and cut by hand as i describe in my “Lost Trade of Stonecutting” blog. It is a totally romantic period, before compressed air, or useful gangsaws. This technology certainly provided a sense of place to urban areas. Cities were defined by local geology. It's the era of the vagabond stonecutter going from job to job, city to city. Many architects came out of stonecutter backgrounds at this time since stone was the fundamental building material. Cities in this era reflected the ground they were built on, giving rise to urban identities defined by stonework. 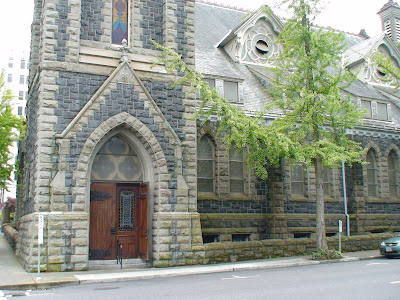 This technology was developed with the invention of useful compressed air. It often used local stone as well if good building stone was available. However if there was no local stone suitable for architectural construction, regional granite was often used. Softer stones, limestone and sandstones, would still often be cut by hand locally.

Stone was removed from quarries by drilling and blasting horizontal beds and drilling vertical blocks to millbock sizes. Slabs were split or sawed  to be hammer finished with multiple air hammers called drifters or shot gangsaws  this was the era when stone cutting was infamous for dustborn ailments. We call silicosis most often caused by hitting the stone with air hammers to shape.

This was the era when my father and his three brothers first started in the stone trade. Faces of building became smooth but not polished with beautiful details. Columns were cut on lathes. Flute often cut by hand with hand-held hammering tools. Intricate details including relief sculpture were put into building facades in granite as well as sandstone and limestone. Stonecutters were employed at job sites as well as quarry fabrication sites. This is the era when cutting and shaping of stone went from local to regional fabrication facilities. These regional faculties developed sophisticated equipment and and often had multiple stone resources. Beautiful permanent building, stone on stone walls were built. Many of these buildings have been gutted out, and refitted, and still serve as great urban architecture for us to enjoy even today. 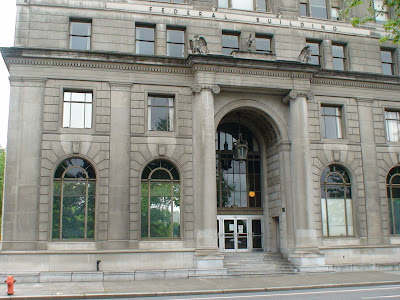 Deep drilled hammer face.  Typical rustication with columns and carving of this period in Granite


The next stone building type totally changed the relationship between the local stone economy with both people, and the local stone forms. The industry separated local knowledge about stone since it become something that arrived by truck or train from a distant fabrication source. This precut cut stone was shipped ready to put on the face of building  for the first time. Stone no longer was cut or quarried locally. Stone is no longer a structural building component, but rather it becomes a veneer over a concrete structure.

The modern gang saw made low cost fabrication of 2-inch and thicker slabs, or what we call dimension stone possible. Huge surface grinders brought stone slabs to a high finish, then they were sawed to size and sent to local building sites to cover concrete structures as decorative and protective veneers. This new building process, the modern high-rise elevator-equipped building, became covered in stone, terracotta, or brick, all as veneers, likely none of it local.

These production facilities were not placed locally but rather close to the source of quality and quantity stone quarries. Varieties of color being important. The stone blocks were shipped by rail to these centrally located modern fabrication plants. There stone fabrication expertise flourished. Finished cut to size building skins were then sent to local job sites for a new trade called stone setters to install. This forced the separation of the local knowledge of stone, and its origin, and how it is fabricated. This all happened in my father's and my lifetime. 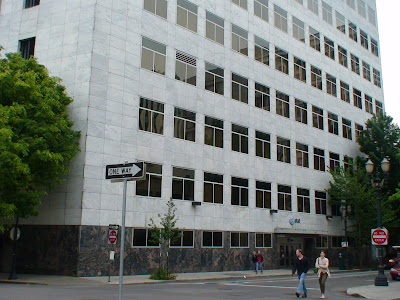 
The final stone footprint once again came with a breakthrough in mass gangsaw cutting. This came about with the ability to mass cut thin slabs by putting post tension in diamond or shot gangsaw blades, fast mass production of multiple slabs brought costs of stone down for building construction and made stone slab prices such that the general public could afford stone counters for the first time. Suddenly there was a stone revolution all over the world.
I believe this technology started in Germany and Italy. Even today if you go to the Italian stone fabrication centers at the base of the aupanies you will see thousands of blocks of stone drilled out from quarries all over the word to be sawed with these gangsaws – although American, south American and Asian facilities are catching up by using this technology.
But the important point for the urban walker is that once again, stone is used as integral part of the building structure. Steel skeletons were erected with floors floating free of concrete side walls. Their weight is transferred down by transferring it to vertical steel supports. What is called curtain walls, a very descriptive term, the glass and stone are mounted on horizontal frames with their mass also transferred to vertical steel supports. Thus the glass and stone skins become the protective skin of the structure. Stone is once again a useful and important structural component of the building. This makes stone curtain walls a practical and economical building component, not just a pretty face covering concrete. Economical mass production of stone slabs certainly changed the urban landscape.

This is the current state of high rise construction. Thankfully design professionals soften the building by employing historical stone elements to soften this harsh building system. I call them urban furniture to ease our eyes. Sculpture is used this way as well. It would be a pretty bleak world if curtain wall construction was not offset this way. Of course traditional tricks of texture and color soften these structures as well. Future blogs. 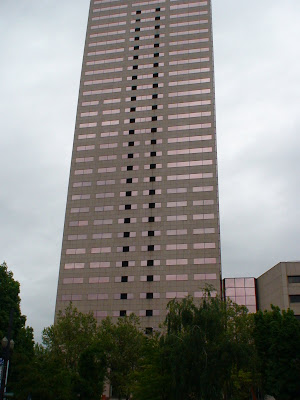 I hope this brief survey of stone footprints makes your urban experience more enjoyable, for as a friend once told me many years ago, i have always looked at the shoes behind the glass, while you looked at the way they the shoes were housed. I think a little history along with how things are done can often be therapeutic to the soul.

Posted by Joseph Conrad at 3:00 PM